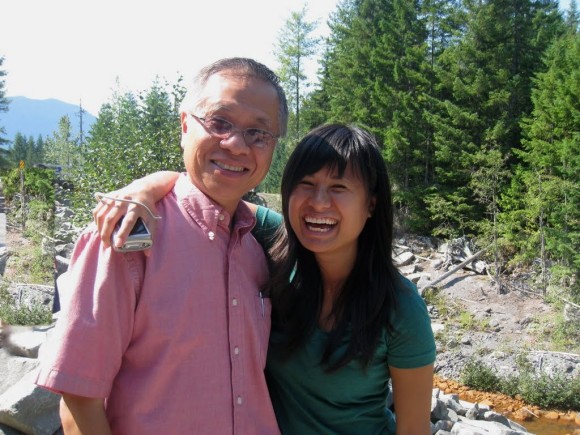 I’m a terribly flawed human being. I’m impatient, quick to judge and I can be very condescending.

These are qualities that very few people have seen but for those who have, it’s unsettling and sometimes hurtful. These are things I really don’t like about myself. I sought to fix these things on my journey around the world.

For two years, I was tested and tried on many levels as I backpacked my way through various cultures. I experienced life-changing highs and lows, and got a whirlwind of perspective. I’ve been humbled and I’ve been changed. Click here to read more about the things I’ve learned.

Traveling has done wonders for my soul and I’ve come a long way emotionally, mentally and physically.

But these flaws remain – although on a much smaller scale – and I’m still a work in progress.

Fortunately for me, I have a brilliant man in my life who, by simply existing and by being himself, inspires me to be a better person every single day of my life.

That man is my dad.

Bố, as I affectionately call him (one of the Vietnamese words for “dad”), is the most kind, patient and gentle person in my world.

Bố is the strong silent type. The type of person who, by saying nothing, can say everything.

I know that in the two years I was out of the country – and now the few months that I’ve been back – I’ve gradually gone from golden child to black sheep.

Bố’s never said anything to this effect, but I know it’s there. I went from being the structured, serious, do-everything-by-the-book daughter…to the vagabonding, free-spirited, living-out-of-her-car daughter.

What’s scary is that the latter version of his daughter is much happier.

Nevertheless, Bố never judges. He might worry (of COURSE he worries) – but he never EVER makes me feel bad about myself. He rarely forces unsolicited advice on me, and when he does, he does it with grace and tact. Even when I make terrible decisions and do foolish things, he respects who I am and lets me learn from my own mistakes. And he never says “I told you so.” He doesn’t have to – it’s that whole strong, silent thing.

That’s not to say he isn’t stern. I was raised in a very strict, disciplined household. However, Bố has recently expressed some regret over having not been stern enough, having not been more of the stereotypical Asian father who steers his kids on the path towards computer science or engineering and a generally stable life.

A part of him worries that having given too much freedom to choose what I wanted to do with my life, he steered me onto the path to nowhere. (Incidentally, I would have my infamous meltdown of 2009, and take the path to everywhere – well, 25 countries at least, haha.)

I wish he wouldn’t think that way. Emotionally, mentally – I’m in a really good place. I’m exponentially more patient and easy going than I used to be, I’m super relaxed and resistant to negative energy.

I feel light. I feel liberated. These are two things I’ve never felt before. And traveling has everything to do with that. Had I not grown up with the mentality that I could do anything I wanted, I would’ve never traveled the world, nor learned the things I did. And it all goes back to how I was raised.

Who I am today is a much, much better person than who I was two years ago. However, traveling didn’t fix everything. I am sometimes plagued by my impatient nature and my judgmental/condescending tendencies. There’s no question where these flaws come from – they are deeply rooted in my childhood.

But also deeply rooted in my childhood and my psyche today is the quiet morale and gentle compassion that is Bố. He’s a stand-up guy, and I aspire to be like him someday.

You know they say that people don’t remember as much the things you say or the things you do – they remember the way you make them feel. My dad is a shining example of that. I’ve had childhood friends tell me they wished my dad was theirs. I’ve gotten random emails from people I hadn’t heard from in 15 years, telling me it was my dad that helped them get through the toughest times in their lives. While I was traveling in Vietnam last year, I was overwhelmed by the kindness of relative strangers who wanted to do nice things for me simply for the reason that I was my father’s daughter. They wanted to reciprocate the compassion that Bố had always given them.

There’s a word in the Vietnamese language that embodies this spirit. The word is hiền. There’s not quite an English translation that does this word justice, but I think you get the idea.

Yeah, that’s my dad. And I wish I was more like him. I need to wear a “WWBD” bracelet to remind myself in situations: “What Would Bố Do?” really. I think I’d be on a direct path to righteousness if I handled every situation in my life the way Bố would.

Why am I telling you all this?

Enough with the mushy stuff. Here’s some other cool stuff about my dad:

For now, I just wanna tell you I’m one lucky girl. And I have the best dad in the world.